An Argument for Glass Ceilings in Politics? 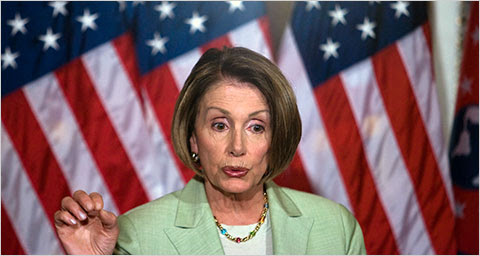 Posted by Victor Koman, PhD at 4:42 PM No comments:

Bea Arthur is dead. OK, I can accept that, though I hesitate to say that when I was 15 I had a slight thing for Maude. Can't explain it, but I recall that I responded to her regal self-confidence, snarky attitude, and... tallness. She'd have made a good Hera. So when other actors were interviewed about her death, Leonard Nimoy stated that he had met Bea when she had acted in an episode of Star Trek and that he remembered her as being a very nice person.

Huh? I didn't recall Maude traipsing around in the 23rd century! She was not listed in IMDB as having been on the series, so I searched the mighty Web and found an article by Joseph Stevenson at Answers.com that stated she'd acted as "Jane Ross" in Rocket Attack U.S.A. and Light Fantastic. Sure enough, IMDB states that Jane Ross was in both those movies and played Tamoon, Chekov's drill thrall, in Gamesters of Triskellion. Rushing to my complete set of pre-remastering Star Trek DVDs, I fast-forwarded to the scene where Tamoon enters Chekov's cell and talks to him. 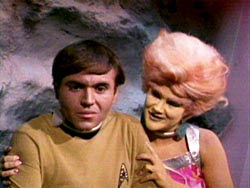 Chekov's reaction was similar to mine (I remember the same feeling from 40 years ago: is that a chick or a dude?). Watching the scene, I noticed that her voice was even deeper, as if it had been processed or she was trying to sound weird. However, some words sounded distinctly Arthurian in their inflection. In addition, her chin and earlobes matched

photos of Bea Arthur. Jane Ross's nose, though, seemed sharper in certain angles than Bea Arthur's, though I only had more recent photos of Bea by which to judge (age adds cartilage to the nose). Bea Arthur is 5'9" and Walter Koenig is 5'6", yet Tamoon appears to be shorter than Chekov in the scene (he might have been standing on an apple crate). In this photo, she appears to be shorter, but she's in flats and he's in boots and she's standing further back than he. Nichelle Nichols is 5'5" and seems to be about Tamoon's height in this photo, but she's in her Starfleet uniform, which included very sexy high-heeled boots. (Now if you want to talk about major things, I definitely had one for Lt. Uhura!) 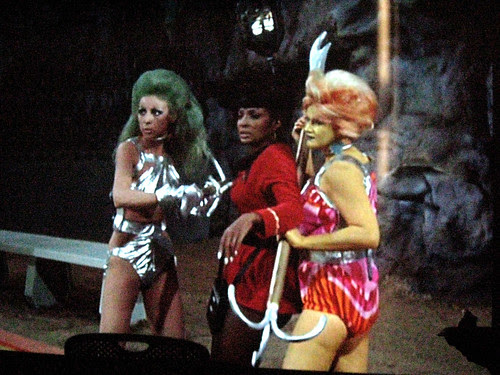 It's important to note that IMDB is usually very good about attributing pseudonyms to actors. If Bea Arthur were widely known to be "Jane Ross", she would have been noted in her Bea Arthur listing as having been in that episode "(as Jane Ross)". However, the Bea Arthur and Jane Ross entries are not correlated in any way. In addition, there is a date of death for Jane Ross of 6/27/85. And she's listed as being born 10 years later than Bea. Interestingly, Golden Girls premiered in 1985, so Jane Ross's date of death could be an inside joke (i.e., no need for her now that Bea had a second hit series).

So what's the story? Was Leonard Nimoy misremembering Jane Ross as being Bea Arthur? Was Answers.com mistaken? Bea Arthur denied being in Star Trek in 2001. Was she lying to protect her opinion of her reputation? I haven't been able to locate the two old movies to see if Jane Ross (sans thrall makeup) looks and sounds like Bea Arthur circa 1960-ish. I found a copy of Rocket Attack U.S.A. on eBay, but the postage from Australia is prohibitive. So until a local copy is available, the mystery continues...
Posted by Victor Koman, PhD at 8:19 PM 11 comments: