Narrowly in time for Christmas (and well ahead of Russian Christmas!), two new books from KoPubCo: the libertarian classic An Agorist Primer and the children's novelette The Legend of Anarcho Claus.

Told with clear and concise prose, An Agorist Primer is exactly that — a primer on all the important aspects of Agorism and Counter-Economics: how they work together to enable you to free yourself and expand freedom to your friends, family, and the world!

Samuel Edward Konkin III wrote An Agorist Primer in 1986. A small number of Xerox copies were circulated to investors in the hope that they would finance the publication of a high-quality, hardcover edition. Though some money was raised, it proved insufficient to produce the book. Even though the photocopies bore text reading “First Edition”, it was meant to refer to the proposed hardback edition. This, then — the book now available in hardcover from KoPubCo — is the true first edition as SEK3 intended it.

And just for fun, there's The Legend of Anarcho Claus. Sam always loved Christmas. In both Christmas issues of New Libertarian Weekly, he wrote installments of the secret story of Santa’s rebel agorist son, Anarcho, who brings counter-economic toys to non-coercive girls and boys. I expanded the story into a full-length children's book that I hope will become a Christmas classic.

Order copies now and get 20% off! More important, sales of these books will fund the publication of SEK3's unfinished magnum opus, the appropriately titled CounterEconomics. It will be quite an effort to take the book from typewritten manuscript to published book, first because it was indeed left undone at the time of Sam's death in 2004, and second because it contained very topical examinations of late 1970s/early 1980s events that supported his counter-economic theories. More on that as it develops.
Posted by Victor Koman, PhD at 10:35 PM No comments: 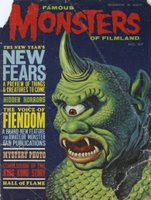 Forry Ackerman died Thursday, having heroically made it to his 92nd birthday Nov. 24th, despite pneumonia and congestive heart failure for which he had been hospitalized a few weeks before. I'll miss him. One of the first magazines I'd ever purchased with my own money was Famous Monsters #27, March, 1964, the one with the Cyclops on the cover (yes, I still have it -- it's one of my prized possessions).

I met Forry many times over the years, beginning in the mid 1970s at science-fiction conventions in Los Angeles. He was always the most joyous and polite of men (and that's saying a lot in fandom!), and when my daughter Vanessa was old enough to show up with me, he doted upon her like a loving grandfather. 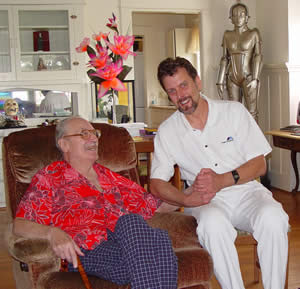 In the 1980s, I found out that he hosted Saturday tours of his Ackermansion and Vanessa and I made several pilgrimages to that sacred place.

Forry has been disparaged by many fans for somehow sullying science fiction with his childlike enthusiasm and his coining of the term "sci-fi". I -- and anyone who ever leapt with joy at the arrival of a copy of FM or Spacemen -- declare otherwise. He did more to bring science-fiction to popularity than nearly anyone else. Without Forry, would there have been a Steven Spielberg or a George Lucas? Early influence is everything in human development, and Forry caught us all as kids, at our most malleable.

His influence on generations will not be adequately gauged until decades from now. He has inspired innumerable people to enter the arts and sciences. He helped to build the future he wanted to see.

As an atheist, he did not think he would "go" anywhere when he died. Many hope he's wrong, and that somewhere he and Wendy can hang out with Bela and Boris and all the citizens of the ImagiNation. Mi amas vin Kvari.
Posted by Victor Koman, PhD at 9:07 AM No comments: