The following essay is part of a series of articles I wrote in 1991, called Perspective Inversion, long before blogs or even the World Wide Web existed. I’ve updated this two-parter with some recent research (which my being a Ph.D. now forces me to cite and reference…) and present it with an upgraded Pro-Life/Pro-Choice Alliance orthogonal chart.

Both sides of the abortion battle are fighting for human rights. Pro-Choice people struggle to defend a woman’s right to control her body. Pro-Life people crusade to protect the life of the child within. It is this apparent clash of rights that has led to explosive confrontations and vicious opposition. The question, though, should not be whose rights shall be sacrificed to whom, but how can we protect the rights of everyone simultaneously. The conflict stems less from evil intentions on one side or the other than from the tragically flawed outlook that abortion is the same thing as pregnancy termination. It is not.


WHAT EACH SIDE WANTS

In order to reconcile these two warring factions, it is necessary to ask what each side truly wants. Pro-Choice advocates seek the unconditional right of a woman to end her pregnancy. The method to achieve this has always been abortion, or the intentionally fatal removal of the fetus. Pro-Life advocates assert that a “preborn” is a human being with full rights to life. To protect this life has traditionally required full-term delivery of the infant. Therefore, supporting reproductive choice required the death of fetuses, and protecting the lives of fetuses required forcing motherhood on women.
Is this terrible choice necessary? Must a woman choose to kill or be enslaved?
I believe that there is a radical new possibility: pregnancy termination without fetal death; freedom of choice for women and protection for the fragile lives they carry. A fusion of both rights.
I believe that abortion is a moral dilemma that has a technological solution. To see what such a solution might be, though, requires that Pro-Choice and Pro-Life proponents both allow the scales to drop from their eyes in order to view the question from a new angle. A perspective inversion, as it were (that is, after all, the title of these articles).
What if a means existed to remove a fetus from one woman and place it—still alive—into the uterus of another? Such a technique already exists on a primitive scale (it is called non-surgical ovum transfer). What if that fetus could be placed in an artificial womb or high-tech incubator? Or frozen cryogenically for later thawing and implantation? Would this not satisfy both the truly Pro-Life and the truly Pro-Choice? For such a solution to be satisfactory requires that members of both movements identify their true desires.

The Pro-Life position comprises two sub-groups: a minority who merely desire that fetuses not be harmed whether or not a woman wants to give birth to it, and a (usually religiously-rooted) majority who demand the additional power to force the woman to see her pregnancy all the way through despite her objections. I believe that every woman has an absolute right to terminate her pregnancy at any point. Human rights are equal and reciprocal, though, and carry with them responsibilities. If a parent has no right to enslave her children—to force them to feed and protect her—then a child (or a self-appointed “spokesman” for a fetus) has no right to enslave its mother—to force her to feed and protect that fetus against her will. To demand forced motherhood — when there is an alternative — is indeed to demand slavery.

Similarly, the Pro-Choice position comprises two distinct sub-groups: a minority who want simply the right to terminate a pregnancy by whatever means are available, and those who demand the additional privilege of destroying the fetus. I suggest that a fetus—being genetically different from the mother—is a distinct human being, separate from the woman even though temporarily trapped inside her. The chorionic membrane is a barrier it builds between it and its mother and should be respected as a threshold no one has the right to breach with deadly intent. To demand a fetus’s death — when there is an alternative — is indeed to demand murder. 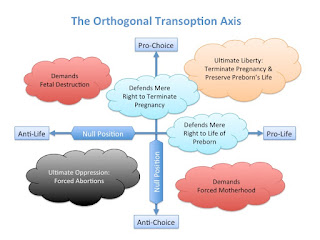 There is no contradiction between Pro-Life and Pro-Choice once the irrational advocates of Anti-Choice and Anti-Life are jettisoned. Pro-Life/Pro-Choice is the only position that consistently defends all rights of all parties to a pregnancy, no matter what their age or sex. Reproductive freedom and preborn life are not fatally incompatible but are both part of the spectrum of human rights.
If the parties to the abortion debate wish to seek detente, I would urge an immediate end to any legal and social obstacles to research that might develop pregnancy terminations that preserve fetal viability. I would urge Pro-Choice and Pro-Life activists to lay down their prejudices and work together for a life-affirming, choice-enhancing, and rights-preserving solution. The price in human suffering and death we have paid for the past several decades has been far too high.

Posted by Victor Koman, PhD at 7:08 PM No comments: